History of the Office of Sheriff 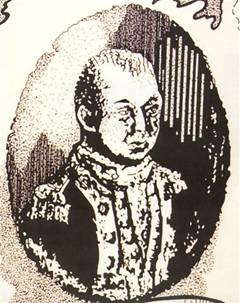 Until Ohio achieved statehood in 1803, the position of Sheriff was filled through appointments made at the pleasure of the Colonial Governor. The first Sheriff on record dates back to the days of the Northwest Territory shortly after the territory was established. On September 2, 1788 the first court of the Northwest Territory was established near the mouth of the Muskingham River. A procession was formed near where most of the early settlers resided and they marched up a path that had been cut and cleared through the forest to Campus Martis Hall. The procession was led by High Sheriff Col. Ebenezer Sproat, with his sword drawn, to the spot where the first court session was held. At the opening of the of the court session, after the Divine Blessing had been given by Rev. Dr. Cutler, Sheriff Sproat reclaimed with his solemn "O yes!" that "A court is opened for the administration of even-handed justice, to the poor as well to the rich, to the guilty and the innocent, without respect to persons, none to be punished without a trial by their peers."

Among the spectators of this solemn event was a large group of Native Americans consisting of some of the most powerful tribes in the Northwest Territory. The tribes witnessed the procession and were reportedly quite impressed with the solemn ceremony. They were especially impressed with the High Sheriff who led the procession with his drawn sword. They were also impressed with the Sheriff's commanding presence and fine physical proportions. Sheriff Sproat reportedly stood well over six foot tall and was in outstanding physical condition. They referred to Sheriff Sproat in their native tongue as "Hetuck" which translates to "Big Buckeye". That particular name was held in the highest esteem amongst the native people and was not bestowed upon someone in a light hearted manner. Col. Sproat from that day forward was often referred to by that name and it became a sort of nickname by which he was familiarly known by his associates. Some historians believe that this is the origins of the term "Buckeye" being used by to refer to citizens of the State of Ohio.

Today the current Buckeye State Sheriff's Association makes reference to Sheriff Sproat in the motto that affixed to today's marked patrol vehicles. On the rear of quarter panels of each vehicle is the B.S.S.A logo along with the words "FIRST TO SERVE SINCE 1788"

Since the early 1800's Ohio Sheriff's have been elected on the county level by the people they serve. By virtue of this process the office of Sheriff has become the oldest law enforcement position in the United States.

The first person elected to the office of sheriff in Preble County was Jacob Fudge in 1808. Prior to that date, the Sheriff of Butler County to the south and Montgomery County to the east handled legal matters in the area before the county was formed. Since that time there have been forty one elected Sheriff's in Preble County. The following is a list of the elected Sheriffs and the dates of their terms. 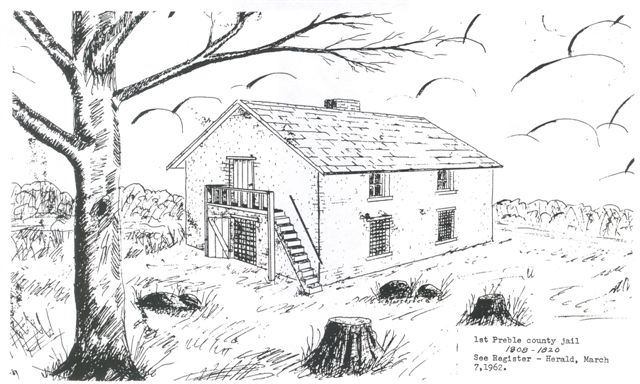 The above is a sketch of the First Preble County Jail in service from 1808 to 1820. The sketch was drawn by local historian Seth S Schlotterbeck from detailed specifications found in the Commissioner's Journal from the time the building was constructed.

When the county was first organized and established the Sheriff would have to transport prisoners to Hamilton or Dayton to house inmates. This became a very tedious assignment due to the long distance involved as the only transportation of the day was by horse or horse drawn vehicles. At first the county tried to rent rooms from citizens to be used a jail but for obvious reasons this proved to be too difficult to find willing members of the community to use their private residence as a jail. Building a county jail became an absolute necessity so on June 24th 1808 the county

commissioners drew up the specifications for their first venture into a public building and authorized the clerk to advertise bids in the regional newspaper of the time "The Western Spy:" The jail building contract was "Cryed and Sold" on August 4th 1808 and John Banfill was awarded the contract for construction with his bid of $739. He was given until January 1st 1809 to have the construction completed. The contract was for the outside shell of the building and did not include finishing the interior of the jail. The newly constructed jail was located at the south east corner Main and Baron St. and stood on the south east corner of what today is the court house square. On December 5, 1808 Mr. Banfill turned the building over to the county commissioners and they immediately started proceedings to have the interior completed. Before the job was complete the jail received its first customer and Samuel Mitchell was hired to do a hurry up job on the jail door to keep the customer from walking away.

The guest was John Ladley from Newport Kentucky. Mr. Ladley was wanted by the Newport Kentucky authorities for wife beating, jail breaking, and horse stealing. Mr. Ladley had a reward posted for his return to Newport and county records indicate that the reward was a very large amount for the time. A total of $62 in fees was charged to the county in connection with guarding, feeding, and transporting Mr. Ladley during his incarceration in Preble County. The jail consisted of a two story rectangular shaped building. The outer walls were one foot thick constructed of stone donated by early pioneer William Bruce. The inner walls consisted of hewn logs approximately one foot thick as well. The grated windows were constructed of iron and were to be made of ½ inch by 2 ½ inch bars spaced 5 inches apart. Each room also had a chain and ring secured to a large stone placed in the floor to secure prisoners. The building was heated by a fireplace on each floor.The building also had indoor restrooms called "The Necessary" and were reportedly quite primitive. The jail was in service for twelve years until January 11th 1820 when it burned to the ground from unknown causes. 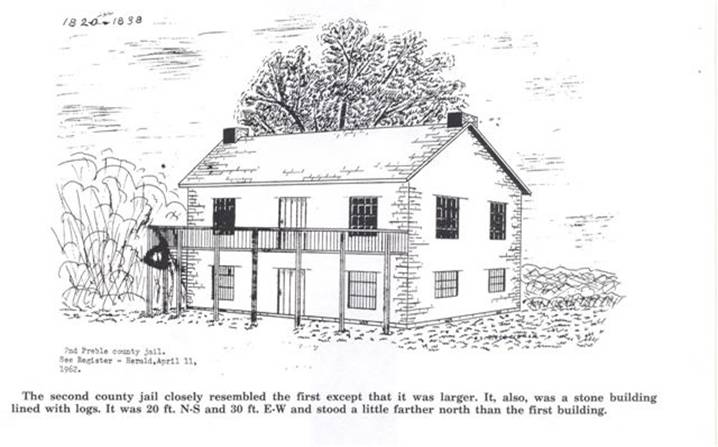 1814 to 1817 and during the construction was also the county treasurer. The build was full of controversy and a dispute over the plans and specifications of the building developed between the county commissioners and Mr. Ward. The final price paid for the building was decided upon by a referee with Mr. Ward being paid a final price of $200 in 1822. The building was later expanded and was quite substantial and served as the county jail until 1838. After the third jail was built the building was rented to George Hendrix for a short time and was razed approximately a year later. 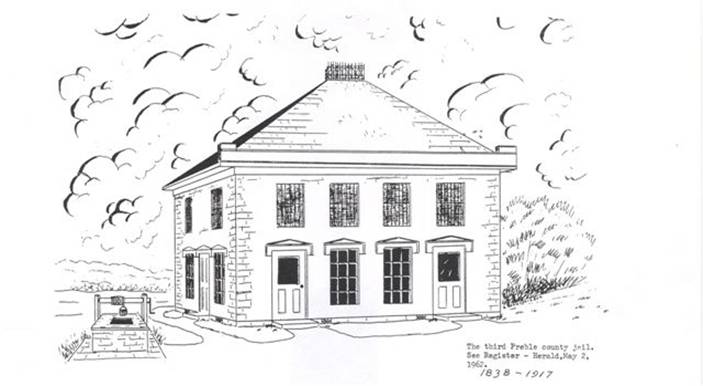 The above is a sketch of the 3rd Preble County Jail drawn by Seth S Schlotterbeck. The jail was in service from 1838 to 1917. Bids for the third Preble County Jail were received by the county commissioners on March 7, 1838 and the winning bid was awarded to Marker S Morton for his bid of $6440 The plans called for the second floor to consist of prisoner and debtor's rooms and living quarters for the Sheriff underneath. This build was also quite controversial with delays and alleged omissions and alterations The job was finally completed in 1841. 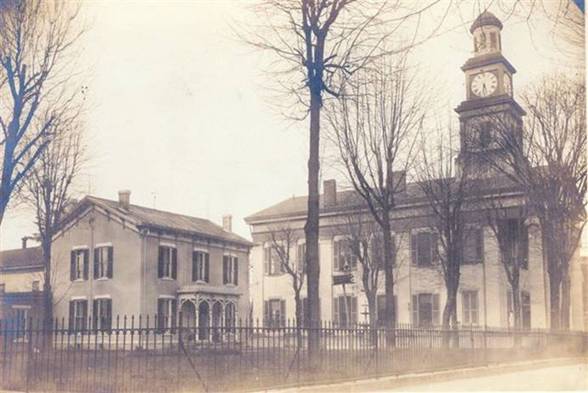 The picture above is a photograph of the Sheriff's Residence built in 1874. The rear of the house is the 3rd Preble County Jail renovated when the new Sheriff's residence was built. 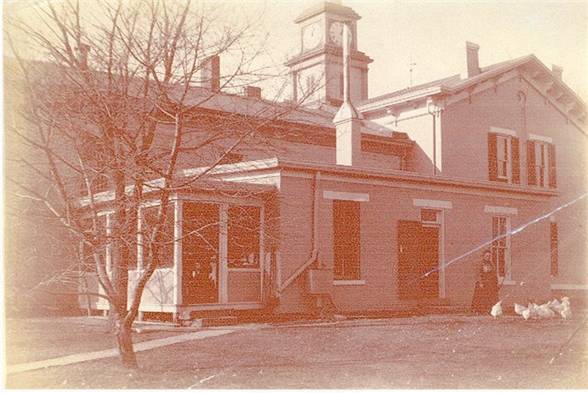 The above picture is a photograph of the East side of the Sheriff's Residence and Jail In 1874 the commissioners took action to enlarge the jail quarters by building a residence for the Sheriff in front of the existing jail. The old jail was renovated and the ground floor which used to house the Sheriff or the jailer was turned into additional space for prisoners. The work was performed by M.S. Morton and E B. Nourse of Eaton at a cost of $8980 and the jail though frequently condemned by grand juries in later years; it remained in use as such until the current courthouse was built in 1918. 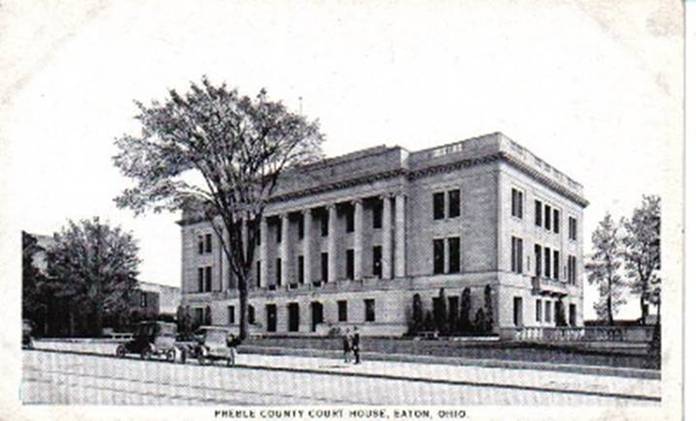 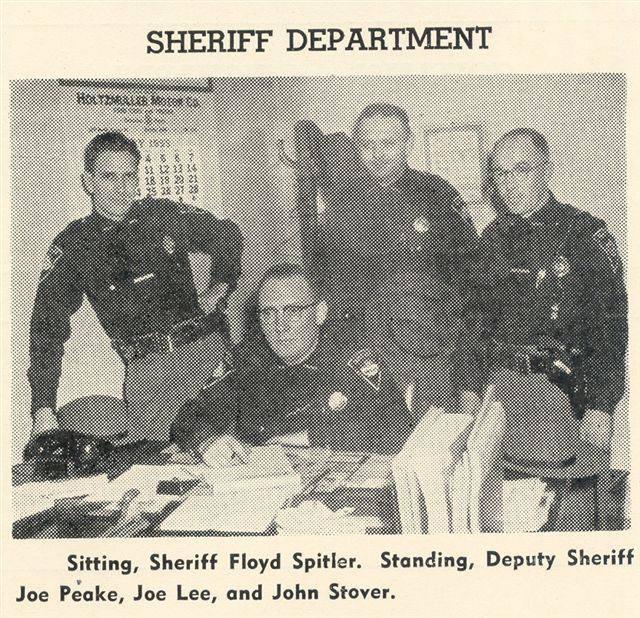 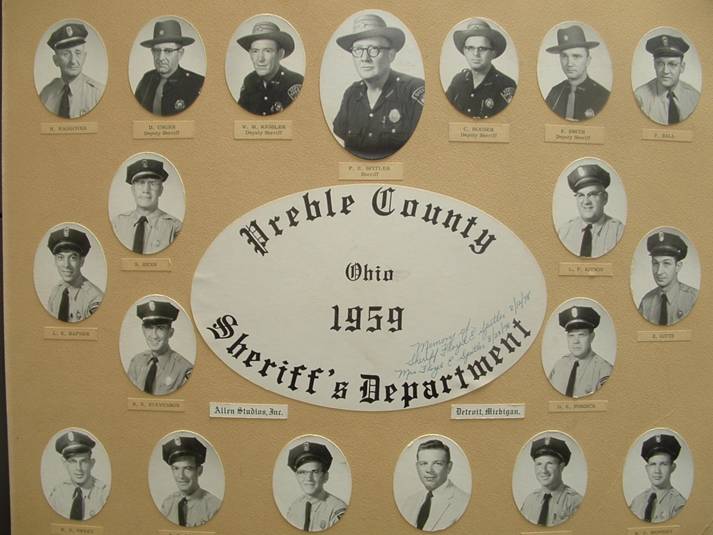 This photo shows the scene of a reportedly fatal crash that occurred on U.S. 127 in the area of what today is the Preble County Landfill. The man standing on the left is Sheriff John Stover. The man on the right is unidentified and is apparently handcuffed. It is not known if the man caused the wreck or just happened to be with Sheriff Stover at the time of the crash. Sheriff Stover routinely took inmates from the jail with him while on patrol either as a reward for good behavior or to obtain information from them concerning other incidents that occurred in the county at the time. The tow truck in the back ground belonged to B and F Garage which is currently located on Wayne Avenue in the City of Eaton and still services the patrol cars the Sheriff's Office uses today. 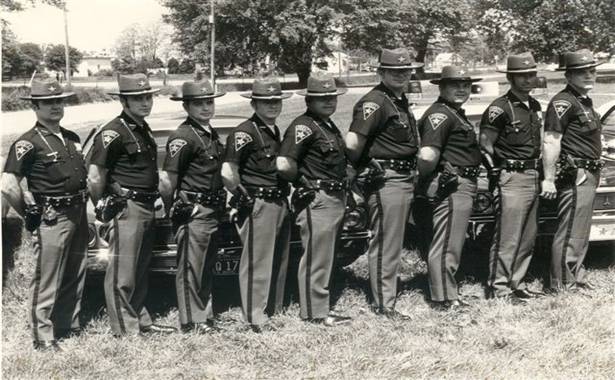 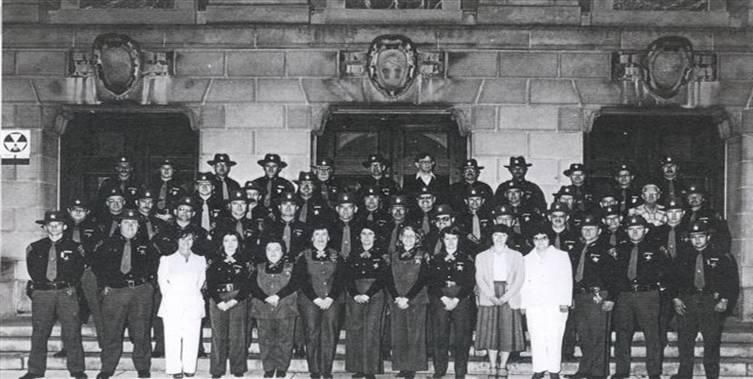 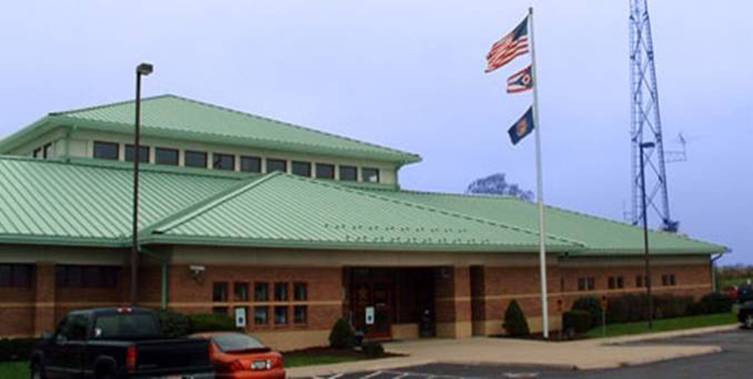 The current Sheriff's Office and Jail for Preble County The Building opened officially in 1994 and houses 75 prisoners. 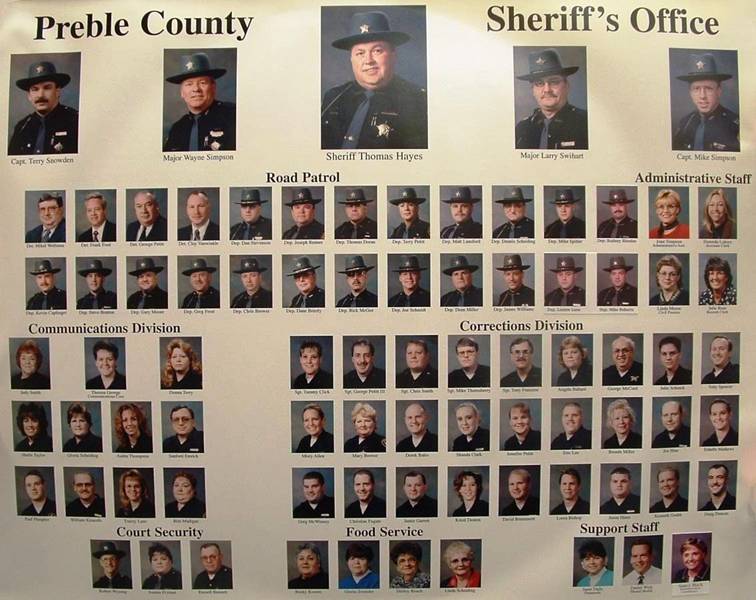